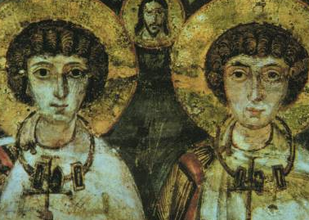 O Lord our God, who made humankind in thine image and likeness and gave it power over all flesh everlasting, and who now has approved thy saints and apostles Philip and Bartholomew becoming partners, not bound together by nature, but in the unity of the holy spirit and in the mode of faith, thou who didst consider thy saints and martyrs Serge and Bacchus worthy to be united, bless they servants, N. and N., joined not by nature… But grant them to love each other and to remain unhated and without scandal all the days of their lives, with the help of the Holy Mother of God and ever virgin Mary. Because to thee belongs all glory, honor and worship.

Until the fourteenth-century of the common era, same-sex unions existed and were blessed by the Christian Church. Both male and female couples were bound in holy unions by the rites of witnessing priests and congregations. Montaigne, in his Italian journals, recalls having witnessed such a ceremony in Rome as late as 1578. Montaigne writes,

Two males married each other at Mass, with the same ceremonies we use for our marriages, taking Communion together, using the same nuptial Scripture, after which they slept and ate together. Roman experts said that since sex between male and female could be legitimate only within marriage, it had seemed equally fair [juste] to them to authorize [these] ceremonies and mysteries of the church.

In the 1700s, Alberto Fortis, the Venetian writer, naturalist, and cartographer records his thoughts on the Church union of two women in his Travels into Dalmatia (1774):

I attended the union [unione] of two girls who became posestre in the church of Perussich. The happiness that shone in their eyes after sealing this sacred bond demonstrated to the onlookers what tenderness of feeling may dwell in souls not influenced–or, to be more precise–not corrupted by the society we call “civilized.”

For centuries, the Church blessed homosexual couples in rites almost identical to those used for heterosexual couples and for reasons parallel to the reasons they blessed heterosexual couples: property rights, legitimacy issues linked to inheritance, and contract negotiation. Sure, love and romance would often come into the mix, but marriage was (and primarily remains) a rite of public recognition of financial rights and responsiblities. Since the Church was the entity most invested in these relations and the one authority which might enforce these bonds, it served its own interests to codify these relations in the best way it knew how.

Historically, religion was not the great enemy of homosexuality. In fact, the rise in laws against sodomy (originally, any non-procreative sex acts) came in the 16th Century, after the Reformation, the movement to lessen the control of any one Church, at least in Western Europe. Homosexual acts (and other non-procreative practices) are made Capital offenses by the State. Governments, not churches, were the first institutions to outlaw homosexuality. (Even in the ancient period, it was military law that forbade same-sex practices.) The shift in attitudes away from same-sex unions occurs as the Church begins to wane in authority and the State begins to wax. Today, when we ask after the place of homosexuality in the public sphere, we need to ask after the State’s interests in controlling that place. We need to be very skeptical of the State saving us from religion or religious influences.

In writing about the history of the Church and same-sex unions, John Boswell makes an interesting point:

Normally the task of the historian is to piece together an account of what happened from the available sources, offer some analysis of the causes and effects involved, and present his or her findings in the most accessible form to readers or students. In a case like the present one…this task is enormously more complicated, because many readers, rather than being eager for the information to be thus gathered and relayed, will be inclined to resist it. (xxvii)

The Economist recently ran an piece on how Nigeria’s President, Goodluck Johnathan, needs to scare up votes for an upcoming election and how the country’s newly signed anti-gay law provides him with a much-needed talking point. PolicyMic has done a very good job outlining the Statist motivations behind Russia’s anti-gay, anti “foreign-agent,” laws signed into effect by Vladimir Putin in 2013. In Singapore currently, the debate is being framed again in terms of religion and the State, and I keep wondering if there isn’t some place else to turn.

2 thoughts on “It’s Philip and Bartholomew: On Religion, The State, and Same-Sex Unions”